Harry Pierce at Cylinders, Merz Barn in the background

Harry Pierce, a locally well known landscape designer who had worked with the influential firm of Lakeland land­scape architects, Thomas H. Mawson & Sons, purchased the Cylinders estate in 1940, with the ambition of turning it into a garden to suit all purposes:  part landscaped arboretum, part sanctuary for wild flowers, and part small-holding.

From 1824 until the end of the Second World War Cylinders had been owned by the Elterwater Gunpowder Works, which had used it for forestry to produce the charcoal which is a major ingredient in gunpowder.  What is now known as the shippon was the old smithy where the draft horses were shod.  Where the Merz Barn stands there was a building set behind a massive outcrop of rock, where the gunpowder was stored. 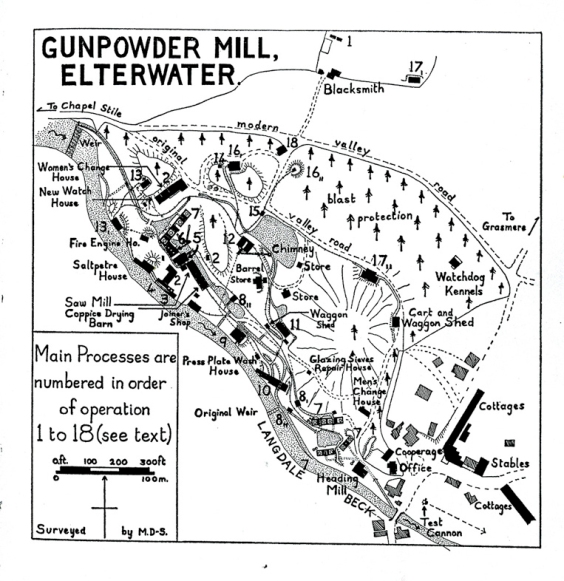 The Elterwater Gunpowder Works in their prime.  The Merz Barn is at No. 17 (at the top of the image), then the gunpowder storage shed.

During the war the trees had all been felled, and when Pierce took over the land it was a sea of ‘brash’, the small branches left after the trunks have been dragged away for processing.  Manpower was difficult to come by, and working only with an elderly farmer Pierce set to clear the land.  The smithy was converted into a cow shed and dairy, and where the gunpowder store had been Pierce constructed a hay barn.  In 1946 he  erected a new building, Ivy Cottage, in the site of an old shed.  This was originally used as a workshop, but from 1947 as a dwelling house.

The Merz barn and Cylinders Estate  The red line marks the area of land acquired by the LITTORAL Trust in 2006.

With the help, firstly of a Langdale farmer, and later Jack Cook, Pierce set about transforming the site, and by 1946 he was able to start selling his soft fruit and preserves to the holiday camp opposite (now the Langdale Hotel and Timeshare), and opening the gardens at week-ends to the public.  In that year too he saw the portrait of Dr. Johnson by Kurt Schwitters (now on loan to the Armitt Library) in a shop window in Ambleside, and commissioned the artist to paint one of himself.  He suggested that the sittings for the work should be at Cylinders, and Schwitters travelled out by bus to see him.

Schwitters already loved Ambleside and the English Lakes;  Langdale enchanted him.  Also he was in the grip of an obsession:  the need to replace what he had considered as his life’s work, his ‘Merzbau’ in Hanover.  When he saw Cylinders he realised that it was the ideal location to create a new Merzbau, which was to be his crowning achieve­ment.

The old gunpowder store, rebuilt as a shed, despite its dampness and the lack of a door, was ideally located.  Schwitters wanted a 50 year lease;  Pierce asked for £1 a week, reversion of the work to him if Schwitters or his heirs failed to keep up the payments.  It was an odd bargain, possibly never signed, but Schwitters knew what was really important.  In 1947 he began work on the Merz Barn installation;   his health was failing, but his vision was burning at full intensity.

Pierce and Schwitters got on well together, for Harry admired artists, and felt his beloved Cylinders to be enhanced by the partnership.  Harry planned for the Merz Barn to become a tea-room for his week-end visitors, thus enhancing at once his income and the reputation of his gardens.  Meanwhile Schwitters was planning to lower the ceiling and construct a kind of grotto.  One wonders how the two ideas could have been reconciled.

In the event there was no need for dissension.  Schwitters, with the help of Wantee and Harry’s son Bill, completed one wall of the construction, leaving only some little sketches and some lines of string to show his plans for the rest.  Had he lived he would have done much more, but it was not in the nature of his Merzbauten to be completed:  they were agglomerations of materials and ideas, in constant evolution, elusive tributes to the spirit that created them. 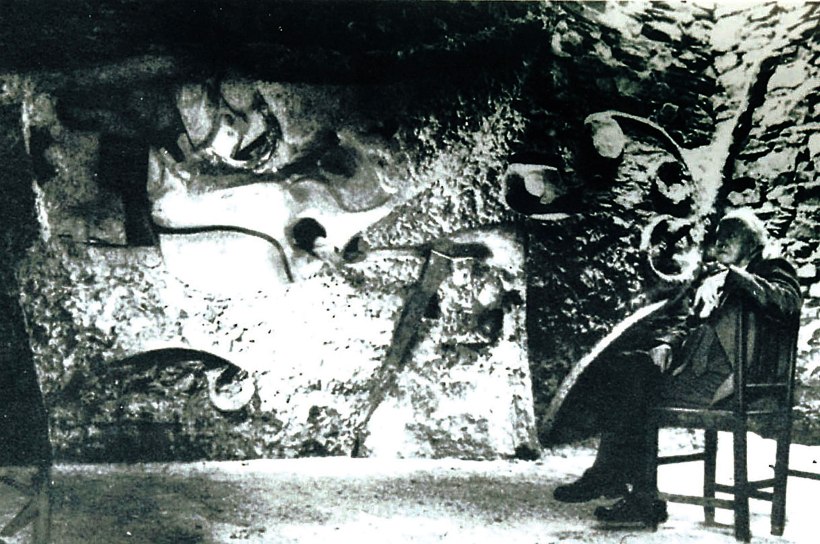 After the artist’s death:  Harry Pierce in the Merz Barn contemplating the completed wall of Schwitters’ art installation.

After Schwitters’ death Pierce attempted to sell the Merz Barn art work to the New York Museum of Modern Art, but there were many reasons why this was not possible.  He didn’t open the tea-room either, as far as is known, although for a while the barn remained a kind of shrine to the artist, despite the fact that most of the smaller artworks Schwitters had created for it had been removed after his death.

Early image of the Merz Barn interior showing some of the small artworks Schwitters made for it.   Photo courtesy of The Hatton Gallery, Newcastle.

The Merz Barn remained, a quiet little shed in a remote corner of England, hiding its secret.  Local people remember being taken by their parents to see Schwitters’ work;  most of them thought it the product of a madman. 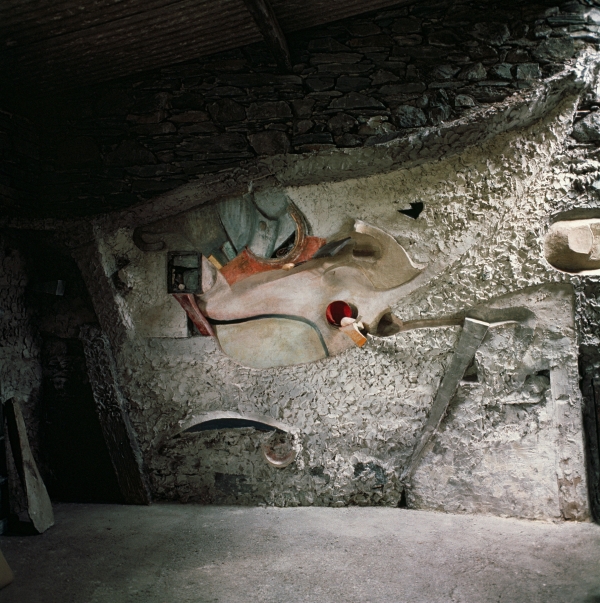 Pierce continued to develop Cylinders through the fifties and sixties, until he generously allowed Schwitters’ end  wall with the artwork to be removed to Newcastle in 1965 for conservation. 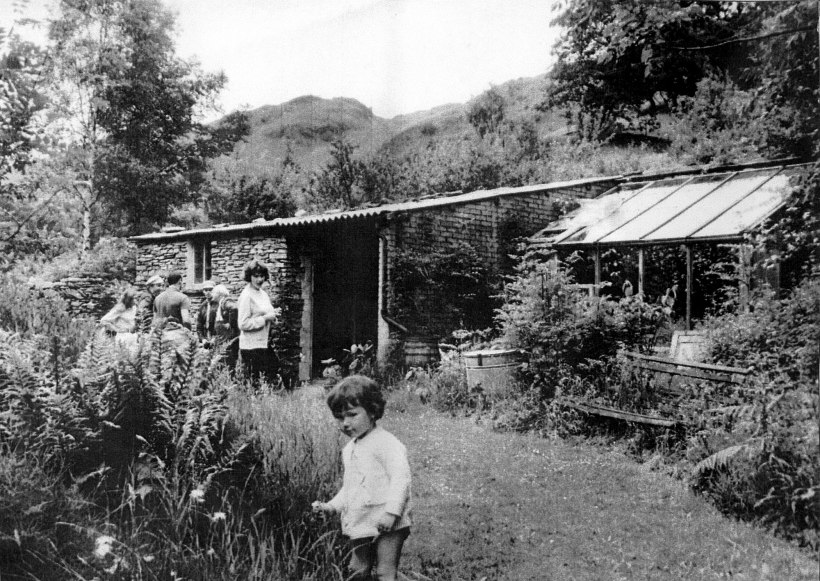 At some point Harry wrote a short memoir, ‘The later days of Kurt Schwitters’.  He also began a book about Cylinders which, though unfinished, describes his aspirations for the estate and charts his progress.  Through its pages one gets a glimpse of his great love for his plants, and at Cylinders itself one can still see the fruits of this in the magnificent and rare tree rhododendrons, the diversity of the conifer species (he seems to have planted on a ‘one of each’ basis), and the profusion of spring bulbs.  Some plants have not survived, but Pierce’s spirit is as alive at Cylinders as is that of Schwitters. 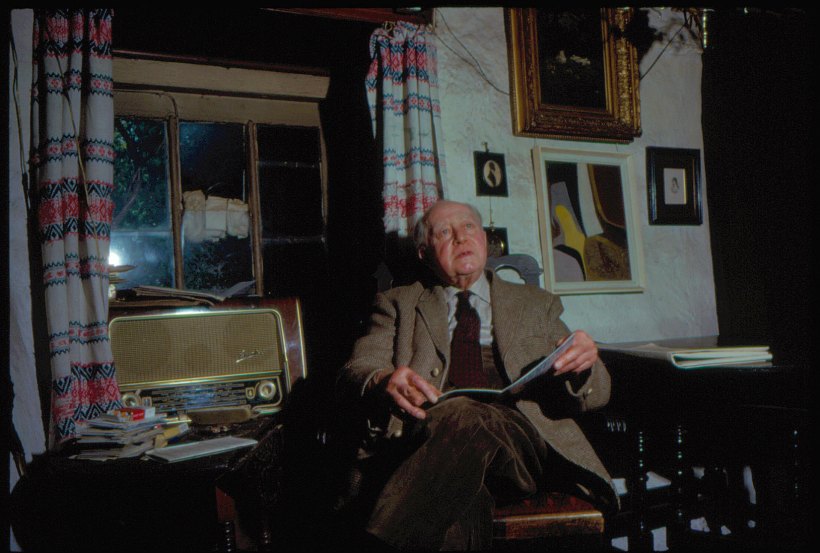 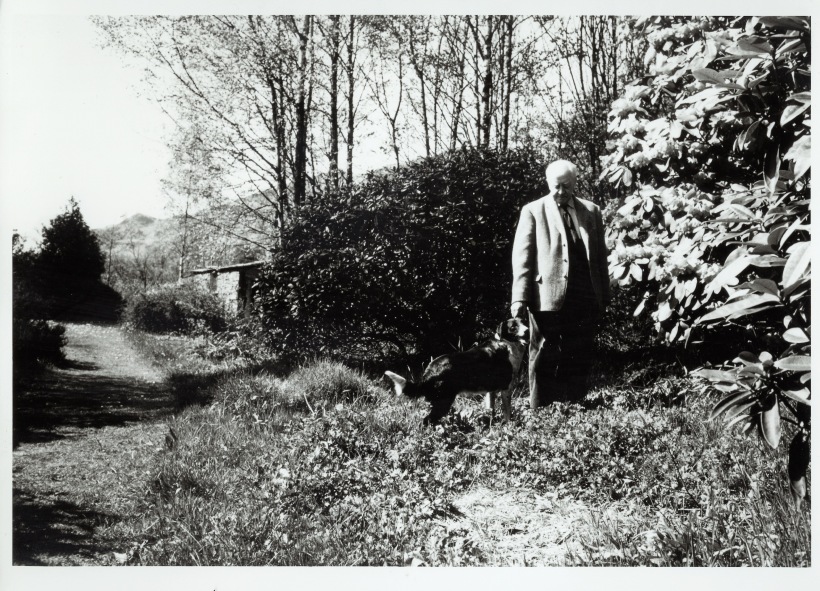 Harry Pierce at Cylinders, c. 1950.  Merz Barn in the background.

In the early years of creating his utopian dream at Cylinders Harry Pierce kept an album of meticulous drawings and plans in which every tree and almost every shrub is lovingly plotted.

Key to the plantings in the first plan.