The Merz Barn project is an outstanding contribution to the understanding of contemporary art, not only in this country but in the world-art context.  It has taken great care and work to bring this to fruition.  It speaks enormously well of Cumbria and of us as a nation, and will undoubtedly be a focus of interest for decades to come.  To think that it will crumble away for the sake of a modest grant speaks very badly of the Arts Council’s priorities, especially in the more remote parts of England.  I do hope this will be reconsidered.    Email from Lord Bragg, 10.6.14

The Merz barn building still stands much as Schwitters left it in 1948. Located in a remote woodland in the heart of the Langdale valley in Cumbria, NW England it serves as a symbolic connection and poignant memorial to the spirit and tenacity of the artist who worked there. This project is about the recovery, documentation and restoration of Kurt Schwitters‘ last Merzbau project; the Elterwater Merz Barn, and the international fundraising campaign that is intended to pay for vital restoration work and sustain the development of the project in the longer term.

During his lifetime Schwitters worked on several Merzbauten.   The most important of these was the extraordinary work he built in his parent’s house in Hanover (1923 – 36).  Known as the Hanover Merzbau this was lost in a bombing raid at the end of the war, and exists now only as contemporary photographs commissioned by Schwitters in the early 1930s.  From these the Swiss set designer Peter Bissegger created a reconstruction for the Sprengel Museum in Hanover.

After his exile to Norway Schwitters began work on a new Merzbau, the ‘Haus am Bakken’ at Lysaker near Oslo (1937 – 40 ).  This too was lost, in a fire during the 1950s.  More interestingly for posterity he also worked in the so-called Schwittershytta on the island of Hjertoya, near Molde.  During the happy pre-war years Kurt and his wife Helma had holidayed in the tiny cottage, the lower half of which was a potato store, and in exile Schwitters went back to live there. 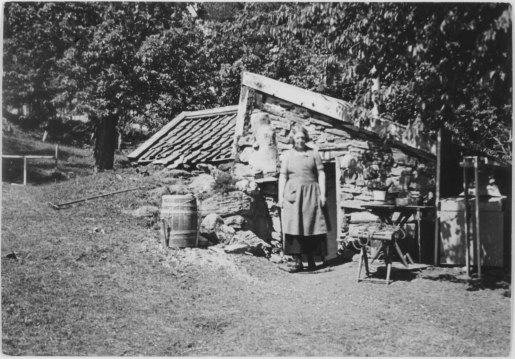 The Schwittershytta on the island of Hertøya, with Helma Schwitters, 1930s.

After his arrival in England, and specially after hearing of the destruction of the Hanover Merzbau,  Schwitters was desperate to resume what he considered to be his lifetime’s work, and create a final, permanent Merzbau.   Not until he left London for Ambleside did this become possible, and on Harry Pierce’s estate, Cylinders, outside Elterwater, he set to work transforming an old shed into a completely new work that he called the Merz Barn.

Left unfinished after the artist died in January 1948, the almost forgotten Merz Barn was neglected for many years until Richard Hamilton arranged for the surviving art work to be removed for safe keeping to the University of Newcastle’s Hatton Gallery in 1965, where it is now on public view.

The Merz Barn building itself is now owned by the Littoral Trust, still survives and can be visited free of charge.  The Cylinders site and associated buildings are used for exhibitions and artists’ residencies and projects, including an annual D.I.Y. Summer School in July, and an autumn event and guest lecture.  See the other website pages for more details. 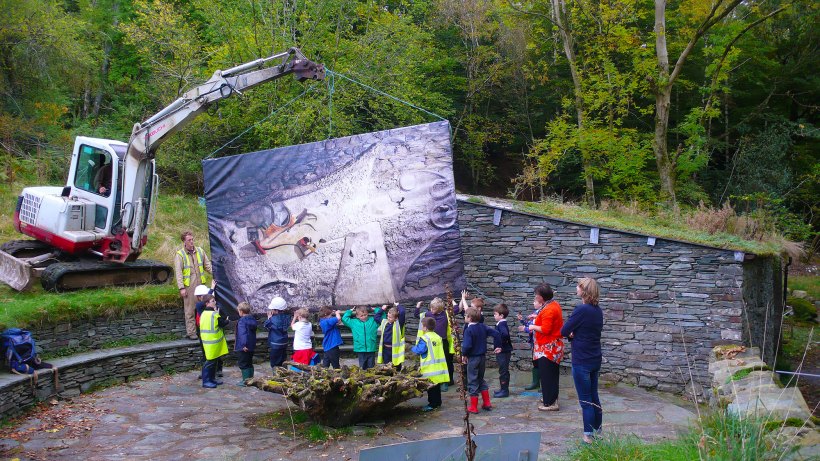 Langdale Primary School, September 2015: the children commemorate the 50th anniversary of the 1965 removal of Schwitters’ artwork from the Merz Barn to the Hatton Gallery, Newcastle. 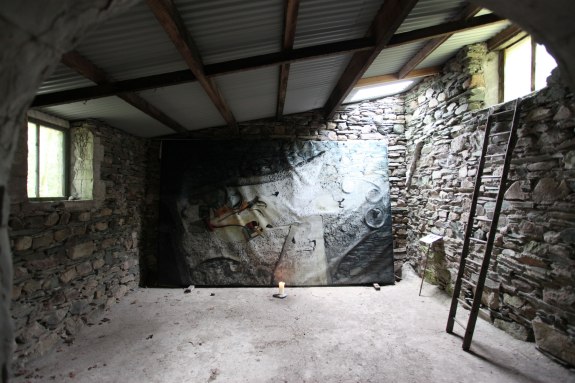 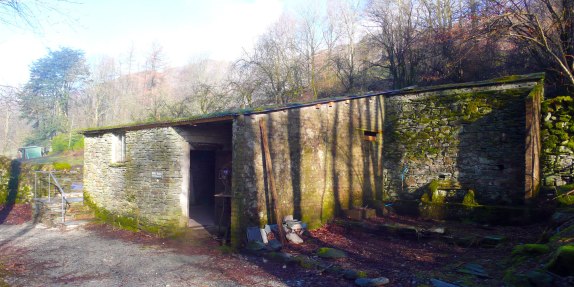 Side wall of the Merz Barn showing the portion still to be restored. 2015.