The Elterwater Merz Barn is nothing more than a small stone building on the Cylinders estate near Elterwater and Ambleside in the English Lake District. 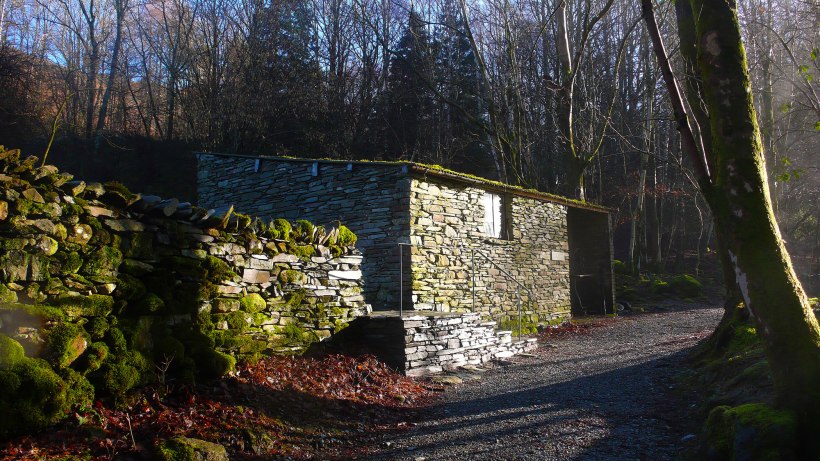 It happened to be here, however, that artist Kurt Schwitters, ‘the inventor of Merz’ as he proudly proclaimed, set up studio in 1946, determined to salvage what was left of his life after fleeing to Britain from Nazi persecution in 1940. 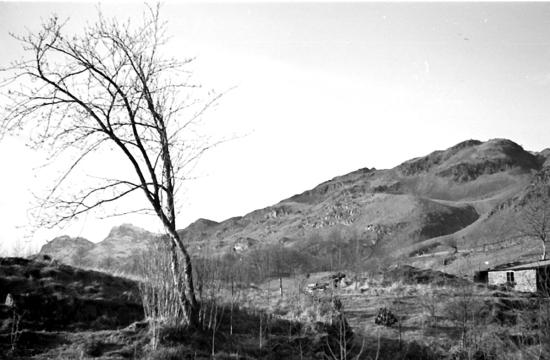 The Cylinders estate, c. 1944, with what was to become the Merz Barn on the right. Photo courtesy of the Kurt und Ernst Schwitters Archive, Hanover.

Schwitters had moved with his English partner Edith Thomas to live in Ambleside in 1945.  There, largely unknown and unrecognised, he struggled to earn a living by painting portraits of local people and Lake District landscapes.  In 1946 he met Harry Pierce, a local horticulturist and landscape gardener, whose portrait he had been invited to paint.

Pierce was the owner of the Cylinders estate, and of the damp stone building on the site of the former storage depot for the gunpowder made by the Elterwater Gunpowder Works, now the home of the Langdale Hotel and Timeshare.   Inspired by the beauty of the scenery, and finding an affinity with the aspirations of Pierce, who was developing a pioneering garden and landscape project on the site, Schwitters negotiated with him to rent the small hay barn on the estate as his studio. 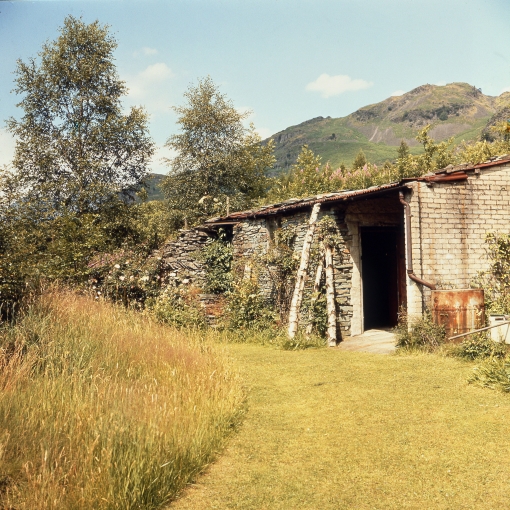 The Merz Barn circa 1953.  Photo courtesy of the Kurt u. Ernst Schwitters Archive, Sprengel Museum Hanover.

Schwitters first expressed his idea about creating a new Merzbau in a letter written to his son Ernst written in March 1947:   ‘It is no use to finish the studio in Lysaker.   I will suggest starting a new Merzbau here in England or in USA.   I simply have to live as long as necessary for a new Merzbau’. 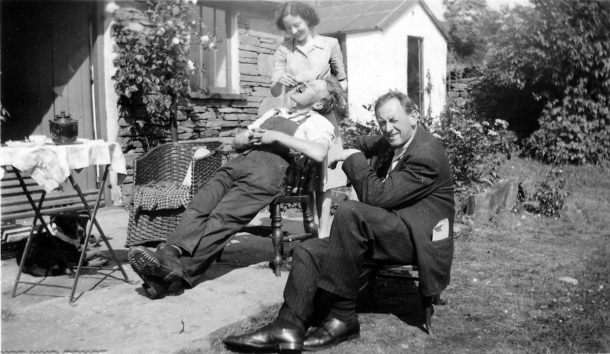 Kurt Schwitters outside the Shippon (Summer 1947), with Edith Thomas and Bill Pierce jnr. in the background.  Allegedly the envelope sticking out of his pocket contains the letter from MoMA New York offering him a grant of $3,000 to restore the bombed Hanover Merzbau.  When this proved to be impossible the Museum generously granted Schwitters permission to use the money to create a new Merzbau in Langdale.

With an initial $1000 advance from the MoMA grant Schwitters was able to commence work on the Merz Barn during the summer of 1947.   Harry Pierce repaired the roof and windows of the shed, and Schwitters began making models of the projected interior, using stones, twigs and branches.  The four walls of the barn were whitewashed, and Edith Thomas and Pierce’s son Bill helped Schwitters prepare the basic armature and plaster for the projected installation on the end wall of the barn.

Schwitters’ only known drawings for the his Merz Barn installation are contained in a letter to his son Ernst, written in English. Photos courtesy of the Schwitters archives, Hannover.

Also helping Schwitters at this point were Wantee (Edith Thomas), and a local Langdale gardener Jack Cook. Edith Thomas also worked on formal elements of the end wall, and it is thought that Harry Pierce may have made minor additions and alterations to the work after Schwitters’ death. 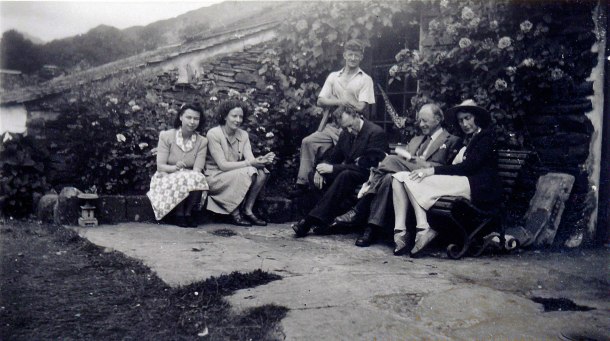 Schwitters was ill, nearing the end of his life (he died in January 1948), but he was in a feverish hurry to progress his work, and his plans for it were infinite.  He talked about needing ten years to complete the work, but in fact it would never have been finished however long he lived, and would never have been more perfect than the wonderfully evocative fragment he left, with its echoes of the Langdale landscape, and of his life and dreams in England.

The Merz Barn artwork photographed by Schwitters’ son Ernst after his father’s death, showing the importance for the work of the light slanting down from the skylight. Photo courtesy of the Kurt und Ernst Schwitters Archive, Sorengel Museum, Hanover.

After Schwitters’ death Harry Pierce lost no time trying to sell the Merz Barn artwork, writing almost immediately to the New York Museum of Modern Art to offer it to them as the body that had put up the funds for its production, but the logistics were just too difficult. 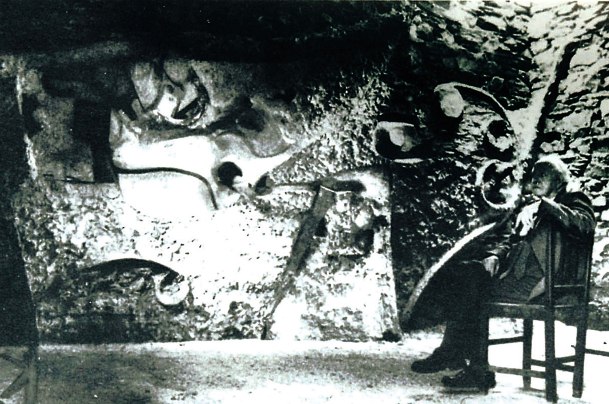 Harry Pierce in the Merz Barn after the death of Schwitters.

The small sculptures that Schwitters had created for display in the Barn were removed soon after the artist’s death, and those in the keeping of Edith Thomas’s family are occasionally on display in Tate Modern, which holds them on loan. 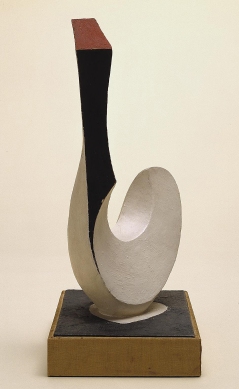 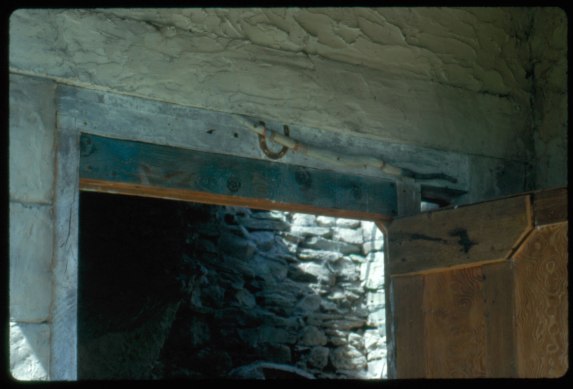 For a while Edith Thomas and the lady artists living a bohemian life in the holiday complex across the road from Cylinders kept the Merz Barn going as a place for art and artists, but given the perpetual damp of the site (at this time the floor was unsealed and a stream was running through the building), the wall artwork eventually began to deteriorate. 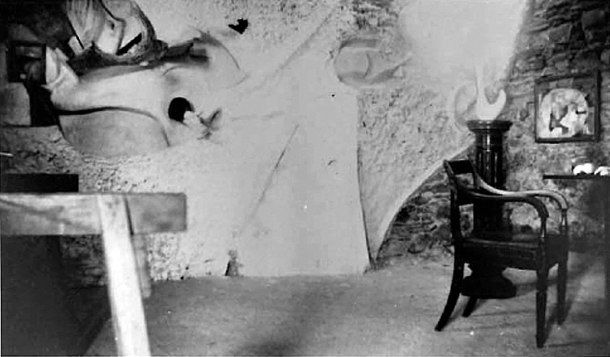 Early Merz Barn interior showing some of the small artworks Schwitters made for display there.  Photo courtesy the Hatton Gallery, Newcastle.

Various routes were tried to ensure that the barn was looked after but these failed, usually simply for want of funding, and in 1965, in a bold move, the University of Newcastle offered to transport the entire end wall of the barn, with the artwork still on it, to their Hatton Gallery, where a new room would be built for it.

The Merz Barn in the 1950s, illustration by D.G. Valentine

A replacement end wall was built for the Elterwater Merz Barn, complete with a long picture window giving fine views over to the Langdale Pikes, and a roof of transparent corrugated plastic.  Harry Pierce until his death in 1966 used the barn as a potting shed.  But by the time the Littoral trust bought the Cylinders estate at the end of 2006 the lintel beam over the windows had rotted, and the building was looking very neglected.

The Merz Barn in 2010, shortly before the end wall was rebuilt. 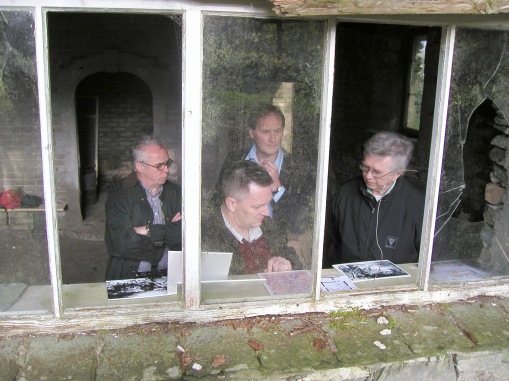 Tate conservator Derek Pullen with Prof. Steve Hoskins and Paul Thirkell of the University of the West of England, and artist John Baldwin, assessing the condition of the Merz Barn, April 27th, 2007

In 2011 the end wall was replaced with a new blank wall, built by Langdale craftsman Mike Hodgson, and in 2013, with the aid of a grant from the Cumbria Fells & Dales Leader+ programme, the roof was replaced with opaque corrugated steel, and an exact replica of the original skylight as stipulated by Schwitters was installed, along with a circular outdoor paved area known as the Merz Platz.